After a lot of playing and fiddling about - I'm please to say I think I've mastered the art of making circle sentiments.....  at least on MY level which isn't very high!! lol

I was inspired by Lisa-Jane who shared one yesterday, and Kerry who always does nice ones - to have a go so I sat and fiddled and fiddled and FINALLY came up with this!  What do you think?  If you'd like to help yourself to it (if it's worth having..) - right click to open the image, then save on your computer. 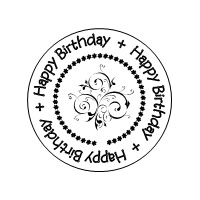 No card from me today but I'd just like to thank Lisa-Jane from Mess 2 Magic and also Sarah over at Stressed Stamper who've both given me this lovely award which I'm thrilled to accept.  Thank you both.

Now the difficult bit, I have to find blogsthat I love  that haven't been given this award by someone already!  Here are the rules (copied from Lisa's blog.... thanks Lisa!)


Here are the conditions for the 'Love Blog' award.
You have been TAGGED and want to participate?
Create a post where you post the 'LOVE BLOG' image.
You should also blog the person's link that gave you the award and inform her/him that you accept the award.
You can then choose 3 - 5 favourite blogs which you also link in your post, then each blogger will inform you that they have been tagged.
So here goes with my picks:
Kerry - A Load of Old Pickle
Peri - Stuff
Mags - Madcap Manor


Have a wander over to their blogs....  they have some stunning creations and are often an inspiration to me!
Hugs
Christine x
Posted by Christine L at 18:37 2 comments: 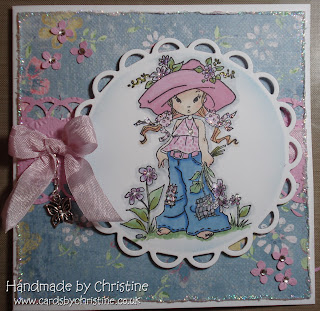 At last, another card!  Seems I've been doing everything but card-making this week - somehow even though I don't work, I have all sorts to do that gets in the way!  Not fair!!

We spent a lovely few days last weekend with Barry's daughter and grandson who is a whole FIVE years old! We took them to the Cow and Calf rocks at Ilkley for a walk (after a lovely pub lunch with a roaring log fire of course), then the next day we did York!  We don't get to see them very often, so it was really nice to spend some time with them....  and that little man is really special and gave me hugs and kisses whenever I asked!  I've put a pic lower down.  But he did leave us with a little pressie - his cold!  We've been sniffing and sneezing all week since they went!!  Ah well, totally worth it! 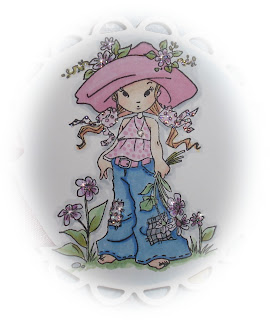 Now... onto my card!  I've used a fab image called Sweet & Sassy (Elisabeth Bell) from Sugar Nellie Stamps. I bought this at the craft shop at Embsay in Skipton, but not sure if she's still available.  She was a dream to colour.... I remember wearing those denim flares and the halter neck tops..... even the big hat! Those were the days! I coloured her with my copics as usual, trying to get lots of shading into that hat.  Then I used a nestie to cut her out - but did lots of shading around the edge with my Tim Holtz blending tool first using a pale blue shadow ink.  I used a DP from fancypantsdesigns.com (which I love!) onto white cardstock, then a MS punched border on both sides of a bit of pink card (you can't see it much but it's there!)...  I ran that through an embossing folder with flowers on which helped with the 'flower power' feeling.  I added some lovely seam binding from The Ribbon Girl, and a butterfly charm from a stash that I bought on ebay.   I distressed the edge of the DP and added stickles and glitter, and of course (!) glittered the image!  Some little MS Hydrangea punched flowers finished it off, with diamantes in the centre (of course!) 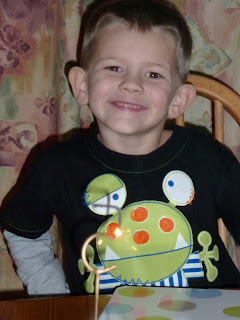 Here's the little man in question - it was a week after his 5th birthday, but we had to have a little cake and put a sparkly 5 in it!  He was tickled pink!

Hugs and Happy Crafting
Christine x
PS - I'm entering it in The Craft Pad Challenge - Girlie, and Let's Ink It Up - Anything Goes, also Sarah Hurley - Birthday Girl, and Moving Along with the Times (Spring), (both of which Lisa Jane told me about - thanks!), then Totally Papercrafts (One for the Kiddies) thanks to Sarah for telling me about that one!   I'm going to have to find out more about where to look for challenges....... at the mo, I have no idea!
Posted by Christine L at 20:08 16 comments: 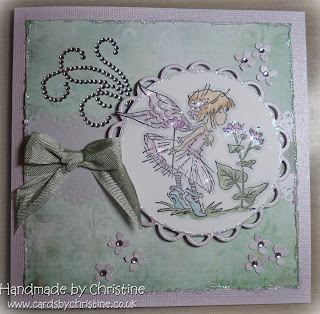 I decided to get stuck in today as my darling OH was at work!  So I did a bit more tidying of my goodies - then got on with a card!

Using Fairies on Tiptoe from LOTV, I coloured with my copics, then cut with my nestabilities - doing the 'outside of the box' technique again to accomodate her lovely wings.  I added plenty of sparkle with my prisma glitter, my DP was Prisma Marketing Fairy Flora mounted onto Bazzil Bling card, then I used the seam binding I bought from The Ribbon Girl this week to create a lovely bow!  I decided she also needed a diamante scroll - which I bought from the Harrogate show last Sept... one of those 'just because' purchases!  I added a few little flowers using my MS hydrangea punch (which I seem to be using a lot), oh and there was a MS border punch behind the seam binding! 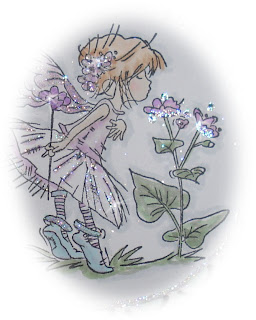 I've spent a lot of the day trying to figure out how to blur the edges of my pics - and I've ended up banging my head against the monitor over and over as I'm really struggling with it!  If any of you out there know an easy way....... please let me know!!

Oh - I distressed the DP and added Stickles in Diamond - I love the look of the distressed edges.  Anyway - hope you like! 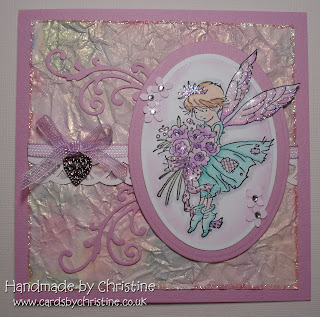 Hi Girls -
Well, this has been like laying an egg!  I wanted to do an 'outside of the box' card - and after following my friend and fellow blogger Christine's instructions - coloured and cut the images over a week ago.  Then came the re-organisation of my crafting space!  Poor little fairy sat on the desk waiting and waiting.......  and I seemed to be finding every excuse not to do the card!  Very unlike me, but I was tidying and organising, rather than just getting on with it!  Something about mojo etc...

Anyway, this afternoon I had an appointment cancelled - so an unexpected hour with nothing to do.  Hmmm I could avoid it no longer!!  So... I got out my OTT light to brighten the day and came up with this! What do you think?

The image I've used is Fairy Bouquet from LOTV and I've used my trusty copics to colour, with loads of prisma glitter on her wings, tiara and flowers.  I sponged around the edge of the oval - and made a hash, so I decided to put some little loose flowers (MS Hydrangea punch) to cover my darker ink patch!  A happy accident?

I used Bazzil as my background card - then used some paper I made (!) loads of last year using Starburst Stains.  It's so easy but very messy to make and starts off with only copier paper.  It has such a gleam though and was just right for this card I think.  I edged it with Crystal Stickles glitter glue to give added bling!

I also used an MS punch for the lacy effect under the ribbon, and a Mariannes Creatable scroll punch for the flourishes.  I finished it with a heart charm that I had in my stash from a few years back.

Question is - am I getting too free and easy with my bling button on Photoshop?  I LOVE THAT BUTTON!! Someone will have to take it away from me i'm getting seriously addicted! 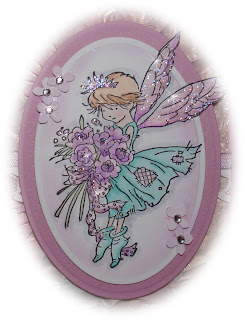 OK....... that's all for now - and Christine, I promise to do more now that I have that space!!
Hugs
Christine xx
PS - I'm entering this card into the LOTV Things with Wings Challenge this week and the Stampavie Challenge, also http://ceschallenges.blogspot.com/
Posted by Christine L at 18:42 12 comments: 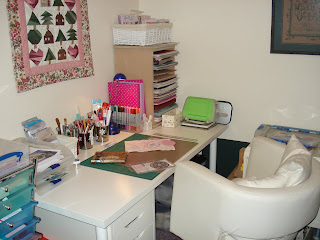 Hi Girls.... did you miss me? (is that a no I hear?) lol! Well, this is what I've been up to! Well, actually, first, my darling OH had a few days off work, so we did a bit of going out etc as I didn't want him to feel neglected..... THEN, my craft room was calling! I used to have a small desk and a single bed in the room, with cupboards holding my stash along one wall. But the bed was only used once a year when we had a full house (we have two double spare rooms for when my girls come to stay), sooooooo I decided it should go, and we should visit Ikea to find me something nice! Yes????﻿﻿﻿
﻿﻿﻿﻿﻿ ﻿﻿So, the last couple of days has been spent sorting the room, and then moving all the stuff that had decamped to my dining room and finding just 'the right' places for it! What do you think?

If you look at the other photos - you'll see what my other small desk looks like (still!) It had so much stuff on it, there was no room to actually MAKE a card.

Anyway, one of the photos of my new desk shows a journal my daughter gave me at Christmas. It is so beautiful, and shows a woman with a couple of tears escaping her eye. Inside it reads 'an eye without a tear is a soul without a rainbow...' How beautiful. And how apt for me - as some of you know for the last few months I've been having a bit of a stuggle, but hopefully now I've turned a corner and I'm feeling more positive! 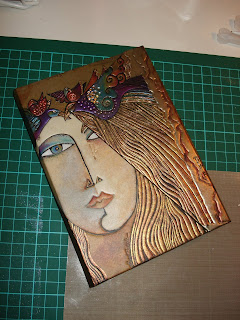 Sooooo I better get on with more tidying.....
Hugs to all that have battled on through my ramblings..
Christine x
Posted by Christine L at 20:28 4 comments: 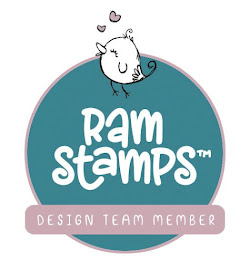