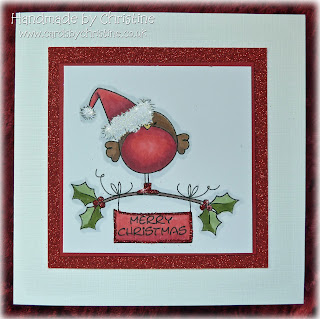 Well at last, I've finished my Christmas cards and got them all posted!  It seems like it's been a mammoth task this year, don't know why, but now they're done I can relax.

My card today uses one of the Digi Stamp Boutique's Cute Robin Collection which was nice and easy to do.... some colouring and shading, then some glittering and layering!  I had to make eight of these, so they needed to be easy!  Just looking at the photo now, it looks like I've got it uneven on the red glitter paper, but honest - all sides are even on the real thing!  I think it's the angle the pic was taken.... at least I hope so! 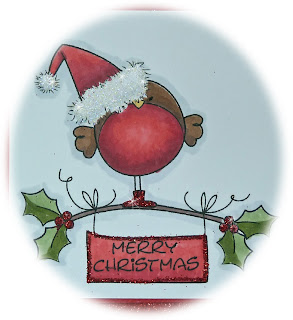 To catch you up on things in Christine world (for those interested) - I've been to the dentist yet again today as I keep having pain in my mouth and terrible pains up the side of my head..... and saw a different guy today as my normal dentist was off.  I've not slept properly for a few nights again now and am getting p*****d off to put it mildly!  ANYWAY, the upshot is that this guy thinks I have ..... now wait for it......  myofascial pain dysfunction syndrome...... which apparently is not toothache - but mimics it as it's muscular at the top of the jaw... and i have to put heat on it, rest it (some hope as it resting means not eating!), take painkillers and massage it.  It's something to do with the lactic acid in the muscle causing a lot of pain.  SOOOOO I'm a bit fed up to say the least.  The other thing he said was not to worry about it (soooo easy said...) as the emotional stress makes it worse!  Then later today I went to the docs as I had to have a routine blood test cos my iron is low - and the nurse there told me my blood pressure had shot up........  Well, I've been in tears most of the rest of the day so now my mouth hurts HORRIBLY!

Sooo I'll just shut up now and go get my lavender bag and stick it in the microwave - then strangle myself with it!!  Anyone know a good field and a guy with a shotgun???  Think I need it!! LOL